Undoubtedly, Claude Monet is the father of the Impressionism movement. Besides criticism he endured and had to undergo throughout his life, he wanted to convey his personal impressions before nature.

Born in Paris in 1840, Oscar Claude Monet grows up in Le Havre, a port town in Normandy. He meets there Eugène Boudin, a local landscape artist and future mentor, who initiates him to the outdoors painting, also named painting of “plein air”, which would later become the cornerstone of his work. He does his formation in Paris and meets his comrades Camille Pissarro, Alfred Sisley, Auguste Renoir, and his nearest friend Frédéric Bazille. The all passionate by the modern landscapes in Paris. Those young artists are seeking for new inspirations and pictorial means. All of them will take part of the “Impressionism” movement in the coming years…

In the late 1860s, Monet splits his time between Paris and surroundings and the west coast of Normandy. He works with Renoir next to Bougival famous at that time for its floating guinguette, La Grenouillère, on the banks of the River Seine.

As he develops his own style, Official Salons reject him, nor does he sell any painting. He faces poverty, all the more so his model and mistress Camille Doucieux gives birth to their first child in 1867. They get married in 1870. The same year, escaping from Franco-Prussian war, Monet seeks refuge in London where he meets his future faithful art dealer Paul Durand-Ruel.

In 1872, he and his family settle in the North suburb of Paris at Argenteuil joining Manet and Renoir among others. It is an intense gestation period for the impressionist group. Monet builds a studio boat to capture light and wind effects on the River and the Normand countryside. Among his prolific production, he paints Coquelicots, Régates à Argenteuil or Le pont d’Argenteuil.


In 1874, a major event happens. The photographer Nadar decides to give some independent artists, among them Monet, the opportunity to show their work in his studio. The art critic Louis Leroy makes fun of Monet’s Impression, Sunrise (Impression Soleil Levant) and sees an “impression” of a painting rather than a finished piece. The movement gets his name from this expression! 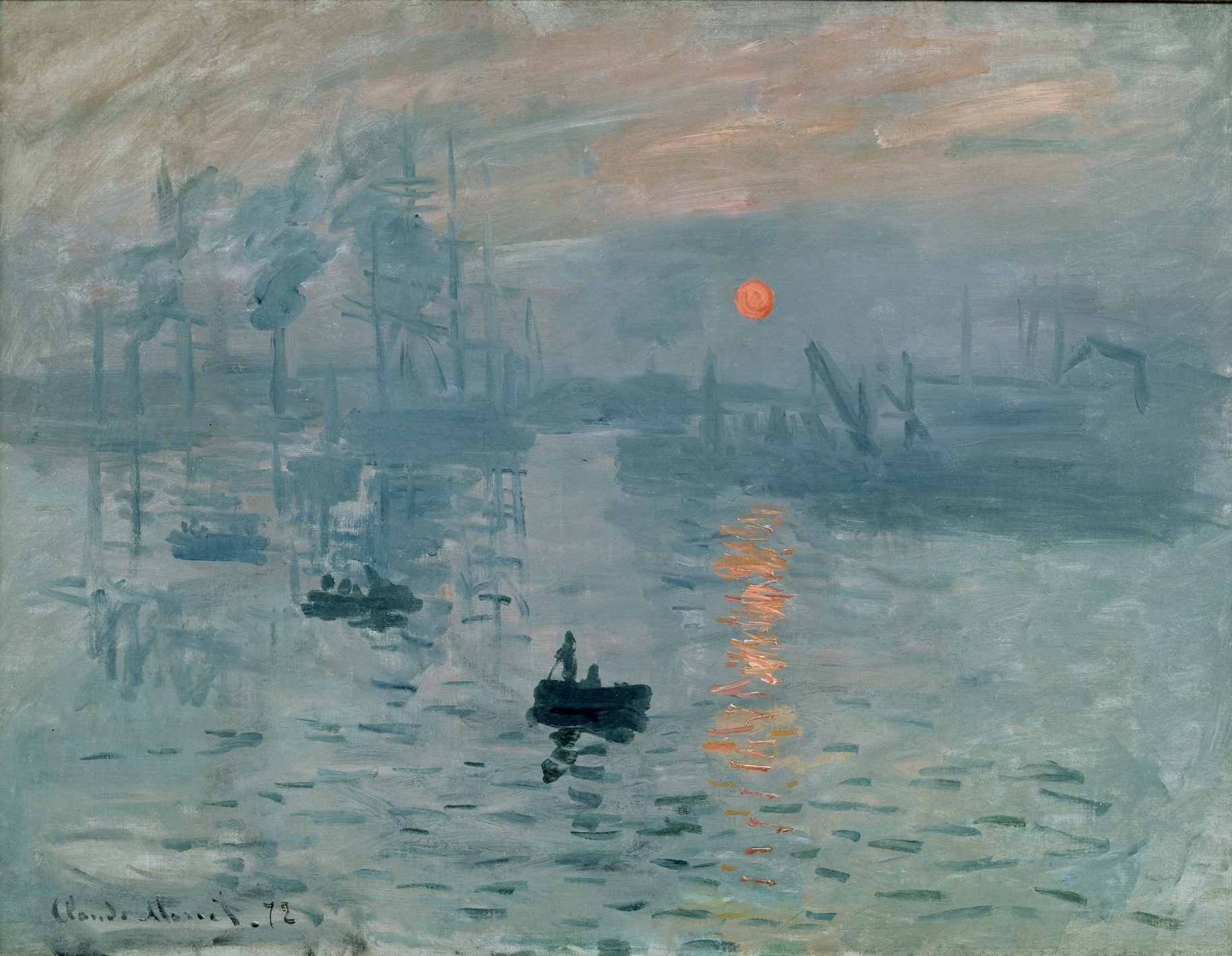 
Despite his recurring exhibitions in Paris, Monet still sells nothing and lives poorly. In 1878, he sets up in Vétheuil on the banks of the River Seine. To the paintings of the capital (among which the Saint-Lazare stations 1877 – 1881) succeed the one of the village where Camille dies in 1879. Deeply affected by this loss, Monet will know better times years after. Thanks to few selling of Durant-Ruel, he then buys a house in the quiet village of Giverny and settles there in 1883 with his extended family, his 2 own children, his second wife Alice Hoschedé and her 6 children.


Giverny will become Monet’s dearest paradise that he always dreamt about. He creates himself a pastoral Clos Normand with a Japanese garden and a pond full of floating lilies. In the 1880s, the painter travels a lot in the South of France, Netherlands, London. Furrowing the Normandy, he starts a prolific period of creation. He works on painting series in which a subject is depicted in variant lights and weather conditions. He paints the famous series of Poplars, Grainstacks and Rouen Cathedral, the Houses of Parliament in London, but Monet cannot only think of Giverny. There, he works on water lilies series, alchemy of plants, water reflects and light. In spite of his life’s woes, he losses his second wife Alice in 1911 and his oldest son Jean in 1914, he goes blind with cataracts and dies of lung cancer at the age of 86, serenely in 1926. Monet is buried in Giverny church cemetery.